The duty of memory

In 1945, when released from the Mauthausen concentration camp, my grandfather Aaron discovered that he had lost his entire family in Auschwitz. His world ended there. He was left with a shred of hope in men, with which he went to Israel, where he remarried and built another family. His days were forever haunted with the certainty that hope was not enough to guarantee that events like the Holocaust would not be repeated.

On November 1, 2005 the United Nations General Assembly took an important step towards future memory by implementing the International Day of Remembrance for the Victims of the Holocaust. The chosen date was the 27th of January because on this day, in 1945, the largest Nazi death camp, Auschwitz-Birkenau, was liberated by Soviet troops.

We, Jews, have carried this memory for a much longer time. Celebrating memory is, in fact, a duty for those who have a millennary history. So we don't forget. We could not. And, perhaps more than anything else, we cannot allow oblivion.

If it is true that the history of the world and of men is full of dark chapters, the Shoá was different. The Shoah was the result of a gigantic machine built and tuned to perfection to deliberately, massively, murder Jews. And, because it is so different, because it contains such a doctrine of inequality between men and races, it deserved special attention on the part of the international community. One of the greatest crimes against humanity in memory. The lowest point to which hatred has led.

You will, perhaps, say: “The Holocaust again? We all know!”

But no, not everyone knows and not even those who know, know enough. In 2019 a CNN poll revealed that 1 in 20 Europeans had never heard of the Holocaust, they don't know what it was. If we consider the younger generations, the statistic is (even) more shocking. Yes, in this Europe, where the Holocaust took place.

But the purpose of this day is also, and essentially, pedagogical. It is therefore worth emphasizing that this is not just a “Jewish” date. Education is indispensable to help promoting a sense of belonging to a common humanity, creating societies resilient to violence and hatred.

It is about not letting barbarism fall into forgetfulness to, on the other hand, educate for tolerance and peace, by example and alerting for the fight against anti-Semitism.

It is about remembering the lighthouses that, even during the Holocaust,
illuminated the world – the Righteous Among the Nations – such as Aristides de Sousa Mendes and many others who, to the detriment of their own lives, made sure that many of us survived. 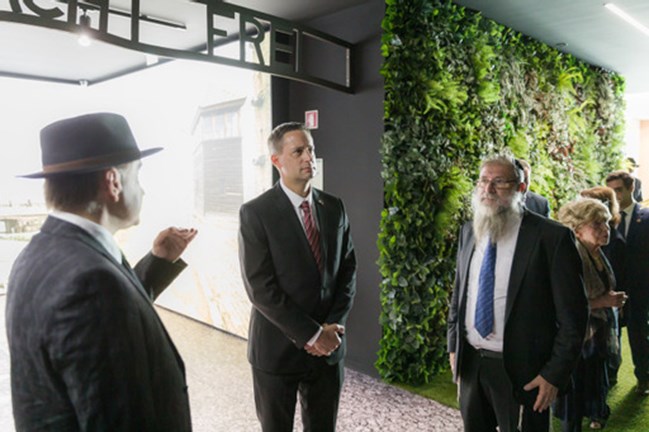 That is why the Holocaust Museum in Porto and the future Jewish Museum in Lisbon are so important in Portugal.

The Holocaust Museums, obeying to a common principle to all museums - of a certain crystallization of the past - are founded since their conception with a pedagogical function of paramount importance: not only to reveal what it is to be Jewish, but also to force the visitor to walk in his shoes, becoming a spectator-actor of barbarism where for some time he is immersed so that the Other ceases to exist because the Other became himself. Why is this important? Because that is (also) the way to give dignity to the victim. The memory of the genocide that was the Shoah is intended to be perpetual. Not because there is any masochistic pleasure in reviewing the ignominy that condemned 6 million souls to death and others – so many – to a shattered life, but because this wound, inevitably always open, 77 years after the end of the Second World War, in which fewer and fewer Holocaust survivors are left to tell their story, is the guarantee that Never Again.

The Holocaust Museum in Porto is the first of its kind in the Iberian Peninsula. Opened on April 5, 2021, it had, until December 15, a total of 40,000 visitors, mostly young people and teachers. It is immediately proved that this Museum has filled a gap that has existed for a long time in Portugal and that there is an enormous thirst for knowledge on this topic.

Lisbon will also have a Jewish Museum - Tikvá (hope) -, which will preserve and disseminate Jewish memory and experience, valuing cultural differences and promoting interreligious integration.

Ignorance and unconsciousness are the fuels of fear, and with it comes hatred. Anti-Semitism, including denial and distortion of the facts of the Holocaust, is on the rise around the world, with devastating consequences for individuals, communities and democracies.

Last week, the UN General Assembly adopted a resolution proposed by Israel and Germany calling on all states to fight Holocaust denial and antiSemitism, including on social media. Our acknowledgement to Portugal for co-sponsoring such an important resolution and with such strong political significance.

Primo Levi said once that anyone who denies Auschwitz is ready to recreate it.

Let us educate about the past. Let us honor the Victims.

Let us learn for the future and leave darkness behind.

Ambassador of Israel to Portugal

Max Eisen’s lasting words on the Holocaust and anti-Semitism