Dr. Isidore Zuckerbrod, son of Holocaust survivors Dawid and Matylda Zuckerbrodt, was reunited today with Renata Szyfner, daughter of Eugeniusz Szyfner and granddaughter of Eugeniusz's mother Katarzyna Szyfner – both recognized as Righteous Among the Nations for helping save Jews during the Holocaust, including Dr. Zuckerbrod's parents.

The emotional reunion took place at Yad Vashem, the World Holocaust Remembrance Center, in Jerusalem, in the presence of descendants of the survivors who are alive today because of the heroic actions taken 76 years ago.

In March 1942, after the liquidation of the Mielic ghetto, Dawid and Matylda Zuckerbrodt found refuge with Katarzyna and Eugeniusz Szyfner, along with other Jews including the Heller family, who had been hiding there since the autumn of 1941. Eugeniusz arranged a hiding place for the couple and several other Jews on their property.

"My father, who was in his late teens during the war. was very handy, and he built a hiding place for the Jews they rescued in the loft of the chicken coop. It was very important to him also to create an escape route into the forest for them in the event they were discovered by locals or the Nazis."

The Szyfners, who were motivated by altruistic and humanitarian considerations, looked after their Jewish charges devotedly, without expecting anything in return, until August 1944, when the area was liberated by the Red Army.

During their visit to Yad Vashem, Zuckerbrod and Szyfner exchanged information and stories that they heard as children from their parents. 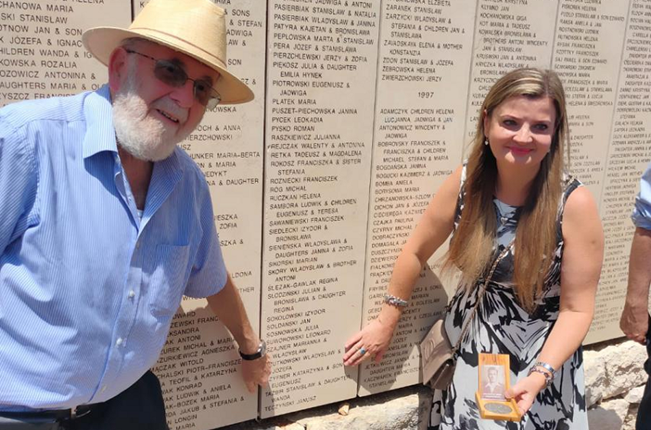 "The versions we have individually fill in the missing gaps; they overlay each other like a woven tapestry and provide a clearer picture of the events that took place 78 years ago."

At the end of their guided tour of the Holocaust History Museum, they entered the Hall of Names, the hallowed chamber at Yad Vashem containing over 2.7 million Pages of Testimonies bearing the names of victims of the Holocaust. Isidore took a moment to search Yad Vashem's Central Database of Shoah Victims' Names, which contains over 4,800,000 names of Jewish men, women and children murdered by the Nazis and their accomplices. In the Names Database, he found entries for several members of his family, including grandparents, but none for his two older siblings.

"My brother and sister had been in hiding in a separate location. They were murdered in the very place they were supposed to be safe. I never knew what really happened until now. Thanks to the stories Renata told me from her father, I now know the date of their death, so I can properly mourn them each year."

"Even after the war, my grandmother and father cared for non-Jewish orphans and raised them as their own family. Goodness was in their blood."

After liberation, the Zuckerbrodts remained in Krakow. Their son Isidore was born eight weeks after VE Day on 4 July 1945. However, due to the antisemitic sentiment among the local population, they decided to immigrate to England. Jankiel Heller, one of the other Jews recued, returned to Mielec, where he was murdered in August 1945 by Polish nationalists. 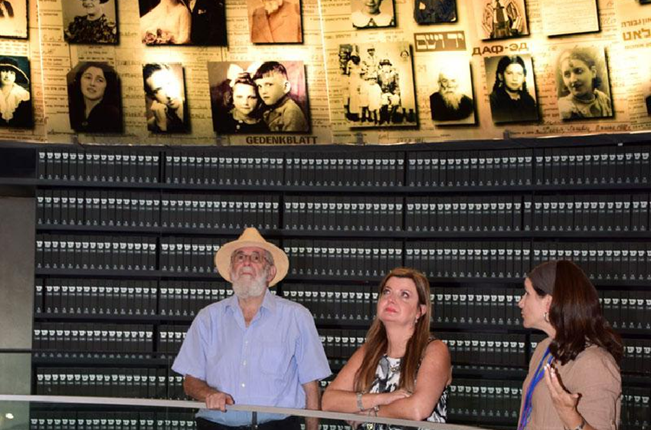 Twenty-five years after the end of the war, Isidore Zuckerbrod visited Poland and went to meet Eugeniusz Szyfner. "I spoke no Polish and he no English, and even though I took a Polish guide and interpreter with me, he was suspicious. He thought the guide had belonged to the Polish Secret Police and didn't really talk with us," recalls Zuckerbrod.

On 6 November 1996, Yad Vashem recognized Katarzyna Szyfner and her son, Eugeniusz, as Righteous Among the Nations.

Director of Yad Vashem's Righteous Among the Nations Department Dr. Joel Zisenwine remarked at the reunion:

"It is vital that the next generations continue to perpetuate the memory of the Holocaust. The fact that you sought each other out and are here today standing in Yad Vashem illustrates how relevant the Holocaust is still today, almost eighty years after the end of WWII."

Yad Vashem continues to receive hundreds of requests each year to recognize non-Jews who risked their lives to save Jews during the Holocaust. These rescuers are sparks of light during a period of darkness and devastation, and provide a source of inspiration in today's fractured society. To date, Yad Vashem has recognized some 29,000 Righteous Among the Nations.