On June 20 and 21, the annual conference of the European Jewish Association (EJA) took place in Budapest and had the theme “freedom to live, freedom from hate, freedom to thrive”. The participants voted in favor of a resolution that will be forwarded to all governments and regional authorities in Europe recommending a 10-point plan of vital measures to promote Jewish life and safeguard Jewish communities.

Nicola Beer European Parliament Vice President and Chair said: “Antisemitic narratives and disinformation are unfortunately on the rise. Every antisemitic rises like this puts European values in danger. The measures to prevent such a situation have many faces. We need to raise awareness to educate to prevent Antisemitism. To have real impact, enforcement is needed on the basis of the IHRA definition. In our schools and universities. That it's there, no one can hide behind the freedom of speech. Here we need you as experts. You as partners. You as a reality check on the ground. I cannot imagine Europe without a strong and prosperous Jewish life. I hope we can build a world without racism, antisemitism and discrimination.” 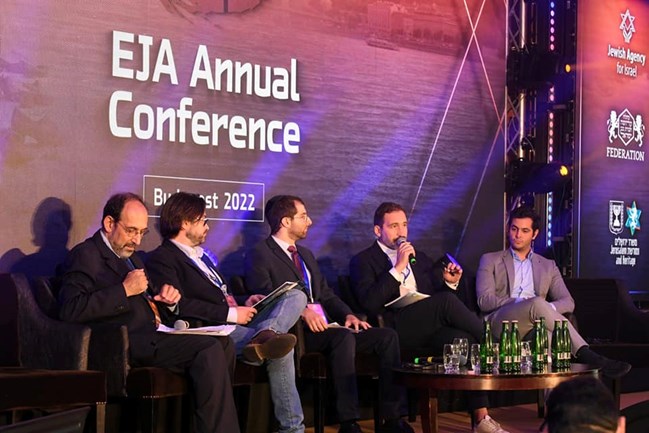 The president of The Jewish Community of Oporto (in the center), participated in a debate on the current situation and challenges of Judaism in Europe.

European Jewish representatives have made statements about Jewish life and anti-Semitism in Europe. Gabriel Senderowicz, president of the Jewish Community of Oporto, mentioned: “As soon as the Jewish communities start making their mark in European territory, the influential antisemites in society will attempt to destroy Jewish life bit by bit, synagogue by synagogue, organization by organisation, using the same methods once employed in the Soviet Union."

Hungarian Deputy Prime Minister Mr Zsolt Semjén, congratulated the many Jewish leaders and senior European politicians who attended the conference and said: “Hungary has zero tolerance toward antisemitism. The lessons of the Holocaust are part of the curriculum our schools and Holocaust denial in the country is unacceptable.” 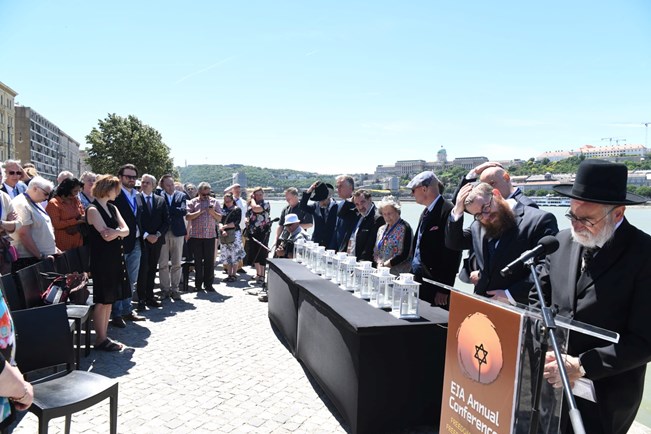 The Chief Rabbi of the Netherlands Binyomin Jacobs recited the kaddish

The conference also included the discussion “Freedom to live: politicizing and using the Shoah against Jews”, which presented new forms of anti-Semitism and politicizing the Shoah. In memory of the victims of the Holocaust, participants went to the shoes memorial on the Danube and listened to the kaddish recited by the Chief Rabbi of the Netherlands Binyomin Jacobs.

The survey “Europe and Jews - a country index of respect and tolerance towards Jews” was released to the press, developed by Jewish Policy Research and which assesses the well-being of Jews in European countries. 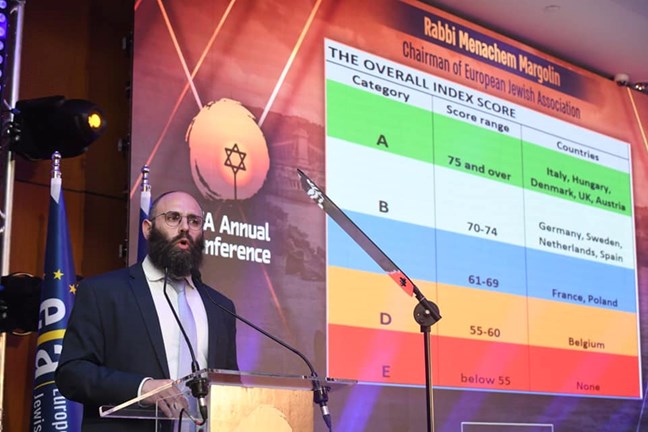 “The goal with this report is to take the excellent data we already have about how Jews feel, about how prevalent antisemitism is, and combine it with government policy measurables”, declared statistician Daniel Staetsky.

The index was composed based on eight factors:

1. Does the government have funding for protection?
2. Are there funds to protect and expand Jewish culture?
3. Has the state adopted the International Holocaust Remembrance Alliance definition of antisemitism?
4. Is there a policy for Holocaust memorialization?
5. Is there a clear Holocaust remembrance educational plan?
6. Does the state monitor antisemitism?
7. What is the status of religious freedoms in the state?
8. How many times has the country voted in the United Nations General Assembly in favor of Israel?

The survey considered the 12 European countries with the largest Jewish population. The index assessed that Italy, Hungary, Denmark, the United Kingdom and Austria are Jewish-friendly; Germany, Sweden, Holland and Spain are intermediaries; and finally, France, Poland and Belgium are less friendly.

Can we stop the politicization of the Holocaust?