Jewish Music in Porto: Rebirth of an old song

Music is at the heart and soul of Jewish ritual observance. This is evident in the melodies that express the meaning of daily prayers, Sabbath services, holiday observance, and the special events of the life cycle. Bible stories are filled with references to song, instruments and music. It is believed that the Temple service included 12 singers and 12 instruments. After the Exile, synagogue services developed new melodies in all countries where Jews resided, often based on local musical patterns. With the resurgence of Jewish communal life in Portugal, there has been a rebirth of Jewish music in this country as well. This is especially true in the Jewish Community of Porto, with the formation of the Mekor Haim Choir.

The choir was formed in November 2020 when a group of community members got together with the intention of learning and performing Jewish liturgical music. Leonardo Mendonza, a conductor, composer, and vocal coach from the University of Porto agreed to act as musical director and the choir started its slow but steady progression to its current stature.

Since it began during the coronavirus pandemic, its initial sessions were held on-line. This presented challenges because of delays in the transmission of sound over the internet, meaning that only one voice could be heard at a time, while the other singer sang to themselves with muted microphones. However, on-line rehearsals also provided advantages. It allowed for participation by singers from Israel, Canada, Argentina, and Brazil at the initial meetings. Music was distributed by e-mail and scores could be projected on the screen. By April 2021, restrictions on face-to-face gatherings were lifted and the choir began to meet in person on Friday afternoons, before the onset of the Sabbath, in the Kadoorie Mekor Haim Synagogue. The resonant acoustics of the synagogue’s domed ceiling inspired the choir to learn complex pieces that would take advantage of this unique setting. 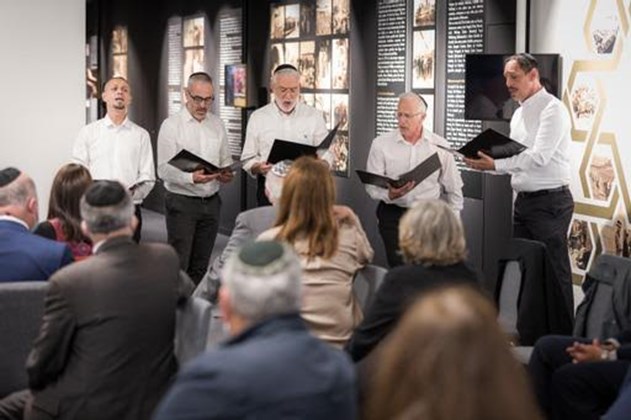 The first songs in the repertoire came for the familiar Friday evening poems of the Kabalat Shabbat. Lecha Dodi and Shalom Aleichem are sung on Friday night all over the Jewish world. The versions chosen by the choir are modern three-part harmonies in the Ashkenazi (Eastern European) tradition.

The choir then added pieces from the Sabbath morning service to continue the themes of the first two pieces. Music by Avraham David Aaron De Sola a composer and rabbi in London in the early 19th century was found. He was a descendant of Jews who were expelled from Iberia in the 15th century. His version of Adon Olam is still sung in the Bevis Marks Spanish and Portuguese synagogue in London today.

Two songs by the Italian composer Salomone Rossi of Mantua were then added. Rossi was worked in the early 17th century and composed liturgical music in the Italian Baroque style. His settings of the Barechu, the invocation to prayer,  and of Psalm 128 show the wide variety of styles that have been used to enrich the Sabbath morning service.

The choir also chose to learn a song in Ladino, the lingua franca of Jews in the Mediterranean world, from Iberia to Turkey. Tzur Mishelo Achalnu is an old poem often sung before the Grace After Meals. The melody chosen was from an old Ladino love song called La Rosa Enflorece.

The Psalms have provided inspiration for many composers and comprise a large part of the current repertoire. In the 19th century Louis Lewandowski set Psalm 92 (Tzadik k’Tamar Yifrach) to a stirring tune for 4 voices. This is also sung during Sabbath services. His version of Veshomeru, sung before the Kiddush (blessing over wine) also reflect music in the German tradition. Another more modern piece, Yhiyu LeRatzon, by the 20th century American composer Ernest Bloch adds another dimension to the choir program. The words are usually said as a silent meditation at the end of the Amidah prayer. The choral version is a moving setting for 4 voices.

The choir also performs two songs from outside the liturgy, Ani Ma’amin and Hatikva. Ani Ma’amin is based on the  articles of faith written by Maimonides in the 12th century. The melody was composed by Ariel David Fastag, who perished in the Holocaust. The choir first performed this at the opening ceremony of the Porto Holocaust Museum in April, 2021. The museum has become the home of the choir and regular concerts are given there on the last Friday afternoon of every month. The national anthem of Israel, Hatikvah, usually closes every program. The words are from the a poem by the 19th century poet Naftali Herz Imber and the melody is based on a Italian tune from the 17th century.

The choir is actively looking for new members to join. No previous musical training is necessary, though the ability to read music is certainly an advantage. Those who want to join the on-line rehearsals only, if they are unable to attend rehearsals in person, are also welcome. For further information, contact yonahyaphe@hotmail.com

Love in the shadow of death: The story of Ruth