The Jewish Museum of Oporto is included in a strategy of the local Jewish community to fight antisemitism. This strategy includes school visits to Kadoorie Mekor Haim Synagogue, films about the history of the Jews in Portugal; courses for secondary school teachers and others who are interested in themes relating to Judaism and the history of the Jews, and visits to the city’s Holocaust Museum.

The Jewish Museum of Oporto is located on Rua de Guerra Junqueiro, opposite the Kadoorie Synagogue. The garden has a stone epigraph in memory of Chief Rabbi Isaac Aboab, the greatest religious authority of the 15th century, who when the Jews were expelled from Spain went to live in Oporto. Here he died and was interred by Abraham Zacuto, mathematician and astronomer.

Ahead, a large display case contains a prison-carriage of the Inquisition, used in the film “1618", and at the entrance to the building is a message in Hebrew, which can be translated as follows: “Around the world, where a Jew encounters a Portuguese, he must help him; and where a Portuguese encounters a Jew, he must also help him.”

The first room has many important objects for the Jewish religion – the Torah scrolls, a replica of the Temple of Jerusalem, the volumes of the Talmud, the work Mishné Torá by Moshe Maimonides, a shofar and even a gold candelabrum.

We are taken on a plurisecular voyage, which starts with Abraham, who obeyed what are known as the Seven Laws of Noah, and continues with the story of his successors, the arrival in Egypt, the saga of the Hebrews arriving on Mount Sinai and the conquest of Canaan, the kingdom of David, the ten lost tribes, the destruction of the first Temple, the destruction of the second and the Jews’ departure into exile, which included the Iberian Peninsula. Here, for centuries the Jews lived side by side with the Romans, Germans, Muslims and Catholics. 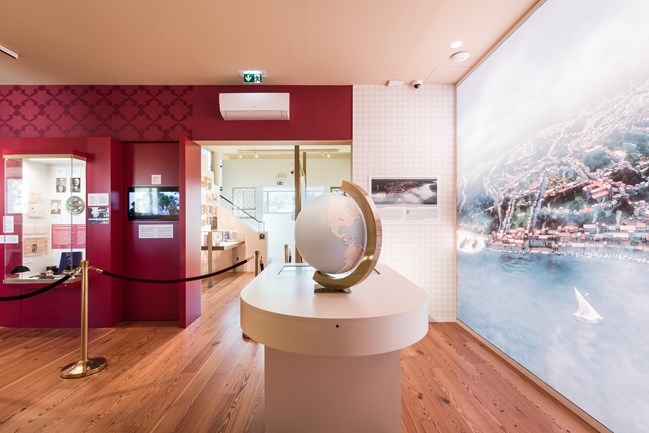 Moving on from the first room, the voyage is accompanied by film shots of all ages, showing visitors the environment of the medieval Jewish community, the surnames of Jews who then lived in what is now Portugal, the epigraph of Monchique Synagogue, the Edict of Expulsion decreed by King D. Manuel, the migration waves of the Portuguese Jews to all continents and three centuries of the Inquisition.

Another room is dedicated to return of the Jews to Oporto occurred in the 19th century, a few years prior to the official abolition of the Inquisition in 1821. These were Sephardic Jews who came mostly from Morocco and Gibraltar who played a very important role in commerce and education in the city. They were basically the same families that lived in Lisbon, Faro, Azores and Madeira.

The museum shows that by the end of the 19th century, there are few Sephardic Jews living in Oporto. The Jewish community is mainly Ashkenazi now, particularly from Germany. It grew considerably during and immediately after the First World War, with the coming of Jews from Belarus, Ukraine, Russia, Poland and Lithuania.

In 1923, the Ashkenazi families took in a Portuguese Jewish couple, both converted to Judaism, the husband a vigorous and intelligent army officer who, overcoming the introverted nature of seventeen of his brothers in faith of Central and Eastern Europe, successfully convinced them to set up an association called “Comunidade Israelita do Porto” (CIP - Jewish Community of Oporto) similar to the “Comunidade Israelita de Lisboa” (CIL - Jewish Community of Lisbon).

The Jewish Community of Oporto (CIP) was created in the shadow of the foreign community of Jews in this city and it was headed by the only person who was really fit to do so: the Portuguese army officer. From 1926 onwards, the only Portuguese in the community headed a personal project, with the aid of the London Sephardic community, to try and convert Marranos as a whole to Judaism, for were thousands around the country at the time. This attempt resulted in the construction of the large Kadoorie Mekor Haim synagogue paid for by the Sephardic diaspora, but not a single official Jew in the light of Jewish law. 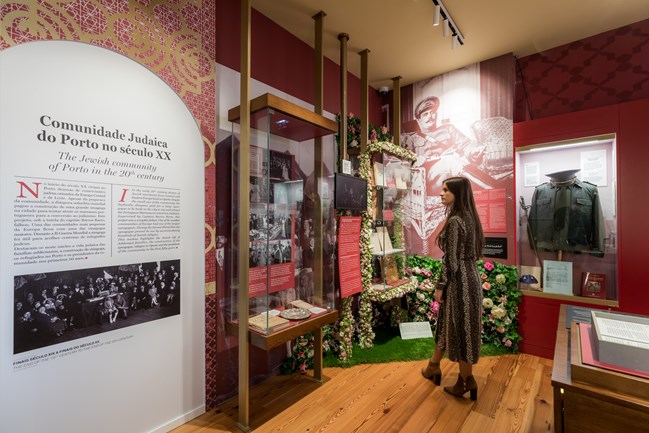 During and after its construction, the synagogue building was placed in the hands of the city’s few Ashkenazi families. In the end, it played a key role in sheltering refugees during the Second World War, which was followed by decades of depletion and desolation.

In the 21st century, largely as a result of the 2013/2015 legislation that gave Portuguese nationality to Sephardic Jews, the reality changed: the community rapidly grew to comprise hundreds of Jews from thirty countries.

That part of the museum covering the 21st century shows many religious and cultural activities, and letters received from prominent people around the world.

Another room displays the many awards won at film festivals for the films which the community produced in a unique project worldwide, with Oporto Diocese, which involves the following activities: the Production of four films - "The Nun's Kaddish", "Sefarad", "1618" and "The Light of Judah" - covering events that have occurred over the centuries in the Portuguese Jewish community; the promotion of the Jewish Museum and the Episcopal Palace Museum; and social causes, helping children, the elderly and the sick.

The “Antisemite Room” is dedicated to modern antisemitism. It is important that students in Portuguese schools do not associate antisemites only with skin-heads and jihadists. Antisemites belong to all political and religious factions and have a negative perception of Jews, Judaism or Israel, which they always perceive as a threat to other peoples. The central area of the museum have huge statues on display representing modern antisemites, incorporating their ideas, publications, and other forms of expression. 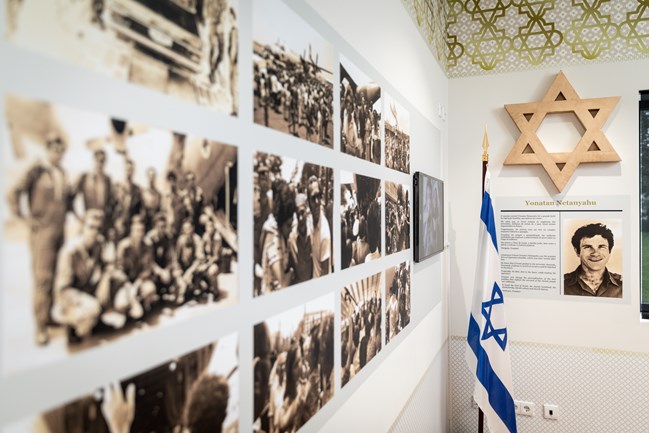 The Entebbe Operation room aims to bring young Jews closer to Israel. It is dedicated to young Jews who have no memories of the many counter-terrorist actions that the IDF and Mossad have faced in the past and certainly are prepared to face in the future as well.

The Museum has a movie theater with a capacity of fifty people. Many cultural events are held at these facilities, particularly film screenings, lectures and conferences on topics related to the Jewish community.

Jonathan Greenblatt, the National Director of Anti Defamation League, said "The Jewish museum of Oporto will add to the respect and admiration many have for the Jewish people and the Holocaust museum will impart the lessons that all must heed: Don’t be silent in the face of evil. The more people know about the Jewish people, the less susceptible they are to hateful conspiracy theories and malign stereotypes."

Charles Kaufman, President of B'nai B'rith International stated that: "For the growing Jewish community of Portugal, we urge you to teach future generations the glory of our past and the Holocaust as they repel attempts to disparage us in the future. May the Museums serve as a beacon of light for all of Portugal and the rest of Europe. Yasher koach (May your strength be firm)."