The Holocaust Museum of Porto (MHP) was created in 2021 by the Jewish Community of Porto (CIP/CJP) in partnership with B’nai B’rith International and Holocaust museums of Washington, Moscow, Hong Kong and others. The new museum received 40,000 visitors until December.

The Oporto Holocaust Museum invests in teaching, professional training of educators, as well as in the promotion of exhibitions, encouraging and supporting research. "It is important to teach the Holocaust in Portugal. At school my brother and I were the only Jews. The Holocaust was never taught or addressed, and few people knew anything about it" - Dara Jeffries, a board member of the Jewish Community of Oporto.

The Oporto Holocaust Museum portrays Jewish life before the Holocaust, Nazism, Nazi expansion in Europe, the Ghettos, refugees, concentration, labour and extermination camps, the Final Solution, the Death Marches, Liberation, the Jewish population in the post-war period, the Foundation of the State of Israel, Winning or dying of hunger, The Righteous among Nations.

In this Museum visitors have the opportunity to visit the reproduction of the Auschwitz dormitories, as well as a name room, a flame memorial, cinema, conference room, study centre, corridors with the complete narrative and photographs and screens showing real footage about the before, during and after the tragedy. 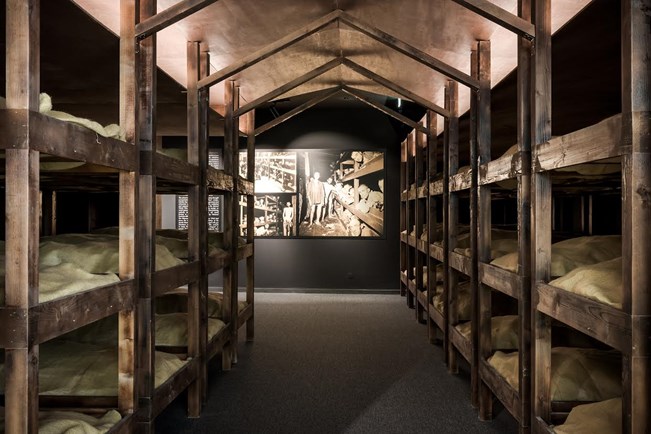 The Holocaust Museum of Oporto is the materialization of the challenge launched to civil society by the government project "Nunca Esquecer, em torno da memória do Holocausto“ [Never Forget, around the memory of the Holocaust] and intends to honor the International Holocaust Remembrance Alliance of which Portugal is a member, as well as sharing with society in general documents and objects left by refugees in the Porto Synagogue during World War II.

The Training Courses organised by the Centre for Jewish Education of Oporto aim to provide the tools needed for teachers of public and private schools to communicate about, reflect on and bring awareness to their students about topics such as Jewish History, the Holocaust and Antisemitism. The courses includes testimonies from Holocaust survivors. Teachers are offered copies of the book "Ten Myths Against the Jews". The content and importance of these myths in the historical context of the Holocaust and the present are explained at the beginning of the events.

The space is supervised by members of the Jewish Community of Porto whose parents, grandparents and relatives were victims of the Holocaust and is part of a strategy to combat antisemitism that already includes the Jewish Museum of Porto, school visits to the Porto Synagogue, courses for teachers, history films and charity actions in partnership with the Roman Catholic Diocese of Porto.

Testimonies of members of the Oporto Jewish community:

– Luísa Cymerman Finkelstein: “For some members of my family life ended in the extermination camps, and others were shot by firing squads after being forced to dig a mass grave.”

– Josef Lassman: “My father never said a word about what happened during the Shoah. He prefered to move on, without looking back. He was then 19 years old and all his family members had been killed. Regading my mother, she was in Auschwitz, in the experimentation block. She described what happened to her, her sister, parents and family before, during and after the Shoah. I don't know if there is any testimony so complete and so moving.”

– Eta Rabinowicz Pressman Wright: "My mother’s sister and brothers were all killed, their children too. In one case, the porter of the building wanted to save the children but they refused and said they wanted to go with their parents. They also died. The only surviving brother was imprisoned by the Soviets in a gulag in Siberia.”

– Michael Leo Rothwell: "My grandparents were good German patriots and loved their country. Two of my great-uncles gave their lives for the Fatherland during the First World War. When the Nazis came to power, my grandparents became unwanted aliens. In 1943 they were transported like cattle to Auschwitz, split up, subject to every possible abuse and murdered".

– Deborah Lieberman Walfrid Elijah: “The Holocaust must be recounted by the victims. My mother was an orphan when she reached Argentina and my father was forced to play the violin in Theresienstadt propaganda camp. I had no grandparents when I was born. They were all executed in Poland, after their heads were shaved, numbers were tattooed on their arms and they were used as slave labour.”

– Jonathan Lackman: “My grandfather escaped from Treblinka and my grandmother, who had typhus, was rescued from Bergen-Belsen camp in northern Germany, where Anne Frank died. I will always share their stories.”

In November 2021, a special ceremony was held in Oporto, Portugal honoring the victims of the Nazi genocide of the Jews, according to the International Observatory of Human Rights (IOHR), which initiated the event. The ceremony took place at the Oporto Holocaust Museum and was attended by 200 teenagers from the city’s schools. “The event is part of a world cordon of solidarity for universal peace and for a better world for all humanity,” said IOHR president Luis Andrade, adding, “This appalling mass assassination took the lives of millions of Jews, as well as an untold number of other human beings.”

As part of the ceremony, Andrade presented a certificate of tribute to Oporto Holocaust Museum director Michael Rothwell.

The Holocaust Museum of Porto is a Memorial to the Victims of the Holocaust, so the use of mobile phones is prohibited and the visitors must respect the sanctity of the place in terms of dress, language, behavior and public displays of affection. It is not allowed to photograph or film inside the Museum, as well as to eat, drink or smoke in the Museum spaces. Young people under 14 years old are not allowed to enter if they are not accompanied by their parents, guardians or teachers. Entry is subject to security procedures.

Charles Kaufman, President of human rights organisation B'nai B'rith International, underlines the important role of the new Museum: "This impressive Holocaust Museum is a testimony to Jewish heritage and resilience."