Other places of Jewish and Marrano memory

Despite the fact that the two-millennia presence of the Jews in Portugal was vigorously erased following the Edict of D. Manuel and the next Inquisitorial centuries, some Jewish traces were forgotten. Added to those it is also possible to find traces of Marranos and the practice of Marranism, a unique religion in the world that mixed Jewish and Catholic rituals, so that it cannot really be called either Jewish or Catholic.

The fundamental basis of the biography of peoples is to keep history alive and preserve memory. Below is a list of fourteen small museums that have offhandedly been called Jewish or Marrano or even interpretation centres. Let us forget the names of these places and whether they are appropriate. Let’s just visit them.

A mikvah used by the medieval Jewish community may be visited in Coimbra. This find is located in the area of the old Jewish quarter and matches the descriptions of the ritual Jewish baths of the time. It is thought that it may be one of the oldest Jewish ritual baths discovered in Europe.

Documents on the Jewish community of Coimbra date back to the Middle Ages. It is known that Rua de Visconde da Luz, formerly called Coruche, was one of the streets that bordered the old Jewish quarters, which probably ceased to exist in the reign of King D. Fernando I, around 1370.

A burst pipe caused this place to be found in 2013 by municipal workers, at the rear of the building, which was bought by the municipality so that it could establish a small museum. It was hoped that it might be yet another tourist attraction in the heart of the city of Coimbra.

2) Centre for the Interpretation of Sephardi Culture in North-eastern Trás-os-Montes, Bragança

In this space visitors will take a long journey through the centuries. The narrative begins in medieval times with the region’s economic prosperity, follows the financial dynasties of Bragança, and mentions prominent cultural figures of Bragança who were forced to go into exile. Finally, there is a dark but passionate area dedicated to the Inquisition.

In partnership with the Portuguese Network of Jewish Quarters – Routes of Sepharad, this memorial is linked to the Centre for Interpretation of Sephardi Culture. The entire space is dedicated to memory. A small synagogue is presented, while mention is made of the place of the woman and the Marrano religious rites. The route upwards ends on the top floor which has a room used for study and research and containing a memory archive and a documentation centre.

The menorah is the symbol of this small locality where large numbers of Jews lived before the Edict of Expulsion. The Almocreve association was responsible for building this small museum recalling the Jews that lived here until the late 15th century, the crypto-Judaism of the first generations of converted Jews and, finally, Marranism, which existed until the mid-20th century.

It is a small museum with only two rooms, one for temporary exhibitions and the other for the permanent exhibition. The main themes in this space are religious rites, Marrano memory and culture in this village. Although everyone adhered to the Church rituals, the name “Ado-nai” was spoken aloud at home. The Carção Marranos still existed in the early 20th century as an individualised community. In the middle of that century, the community started to disappear because of intermarriage with Catholics and migration to the big cities of Europe. 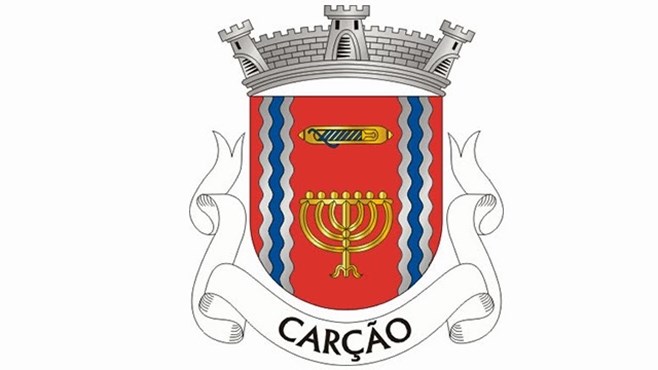 Reference is made to some of the prayers said by the Carção Marranos in the 16th to 18th centuries. The names of the local Marranos, who were imprisoned and sentenced by the Inquisition, are engraved on a memorial stone. Epigraphic material, domestic items and a mantel with an engraved Lion of Judah were saved from a derelict building and are also on display.

This is a modern building located in the old Jewish quarter of Trancoso. Its name pays tribute to the Marrano doctor born in Trancoso in the early 17th century, who became the Chief Physician at the Court of Madrid. Having suffered religious persecution, he went into exile in Verona in Italy and officially became a Jew again. The Centre’s mission is to preserve the Jewish and the regional legacy. It has temporary exhibition spaces, a memorial to victims of the Inquisition with the 515 names of those imprisoned in Trancoso, and a synagogue - Beit Mayim Hayim – House of the Living Waters, inspired on the Tomar synagogue, and built of wood.

6) The House of the Holy Inquisition in Reguengos de Monsaraz

This is a two-storey building with an azulejo panel and iconographic symbols. The name inspires fear. It is believed that it was here that the Inquisitors sentenced and tortured their victims. It is also believed that this house was used as a temporary jail for the prisoners who were transferred to Évora.

Castelo de Vide was a place that had an intense Jewish life. It is believed that after the Jews left Spain in 1492, the city welcomed some 3000 souls who joined the local community. No doubt there was more than one synagogue, because such a large community would have had many spaces used for prayer. As such, the Synagogue Museum of Castelo de Vide – at the crossroads of Rua da Judiaria and Rua da Fonte – should be viewed as a symbol for what was once reality. A tabernacle and a pedestal were found Inside one of the walls of the house. The first would have been used to store the sacred manuscripts and the oils used in religious rites. The pedestal would have been used as a stand for the Holy Scriptures. 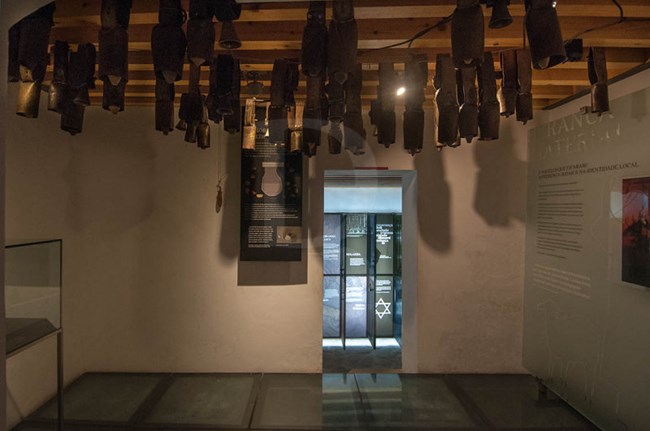 This house contains small museum dedicated to the history of the Jewish community of Castelo de Vide.

This museum portrays the experience of the European refugees of the Second World War who had few chances of salvation, one of which was to flee via Portugal, staying in Vilar Formoso until their subsequent departure for another country. It consists of six exhibitions: People Like Us, The Beginning of the Nightmare, The Journey, Vilar Formoso – Frontier of Peace, In Portuguese Lands and The Departure. Outside, is the Garden of Memory

This synagogue was built between 1430 and 1460, by order of Prince Henry the Navigator who protected and was on excellent terms with the Jewish community, which contributed to the enterprise of the Discoveries. The synagogue closed in 1496, at the time of the Edict expelling the Jews from Portugal by order of King D. Manuel I. For centuries it was not used for religious purposes, Indeed, at one point it stabled horses. It was only in the 20th century that it was bought by a Polish Jew called Samuel Schwartz, who rescued it for cultural purposes, bearing in mind the fact that there is no Jewish community in Tomar. 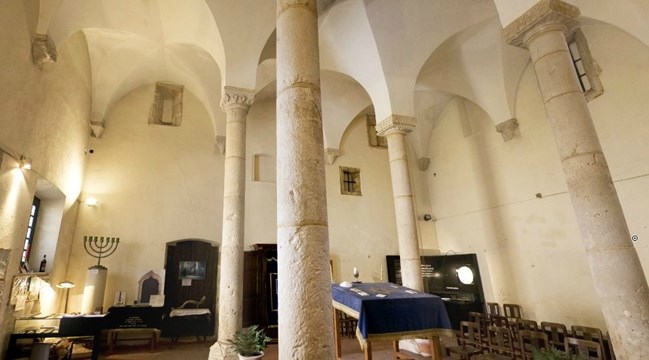 The name of the museum pays tribute to Abraão Ben Samuel Zacuto, a Jew born in the Spanish city of Salamanca in 1450 and forced to flee to Portugal after being expelled from Spain in 1492. The museum collection includes books and objects of Jewish tradition and rituals. Also shown are headstones from various parts of the country, proving the importance of Hebrew culture in Portugal. In particular, note in this collection a funerary stele from Faro, alluding to the death in 1315 of Rabbi Ioseph, a Jew from Tomar, and a stone plaque from 1308, marking the foundation of the second Lisbon synagogue.

When restoration works on the synagogue were completed, it became the home of the Interpretation Centre of Tomar Synagogue since 15 October 2019. It is open to the public, provides information on the origins of Judaism and also about the Jewish presence in Tomar.

The Jewish History House of Elvas is located in a building that in the 16th century was the municipal abattoir. It appears to have been part of an old synagogue. It contains twelve columns that might correspond to the Twelve Tribes of Israel. The original synagogue probably occupied double the present space, as the house next door has a small courtyard with medieval steps, a Manueline window and evidence of a cistern that may have been used as a mikvah.

It has four rooms. The mikvah. The Sahar Hassamaim synagogue with its collections, library and archive. The Space of Memory, about the Jewish presence in Azores. The Room of Memory, on the subject of the Albo sisters and the deterioration of the building that houses the synagogue. 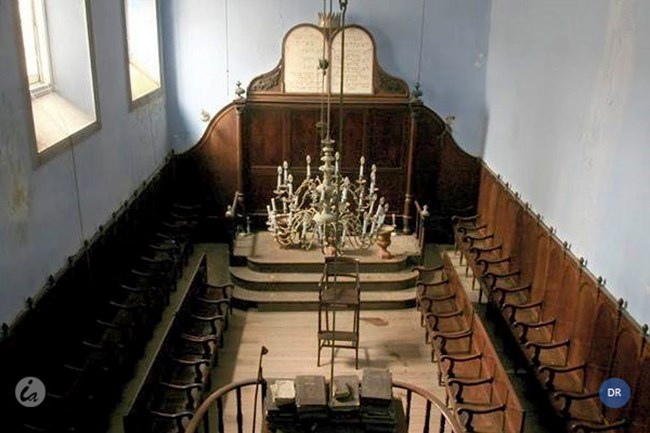 This space was inaugurated on 23 April 2015, following refurbishment and adaptation works of the former Sahar Hassamaim Synagogue, founded on 21 December 1836 by a group of Jews who had come from Morocco.

13) Small museum space inside the Jewish cemetery of Faro

The cemetery of the former community, active between 1838 and 1932, was restored in 1992 and opened as an interpretation centre. Inside the cemetery there is a small museum providing information on the Jewish community that prospered mightily in this city, as well as furniture that belonged to one of the known synagogues. Here you can visit a site that recreates a Jewish wedding ceremony.

The Jewish Heritage House in Gouveia portrays the role of the medieval jewish and modern era New Christians communities in the urban and communitarian development, through the artefacts displayed in the space, the historical narrative associated with this chrono-cultural period and the marks still visible in the county urbanism.

The Hebrew inscription of the medieval Synagogue of Gouveia is particularly relevant, as it is the epigraphic evidence of the last medieval synagogue built in the Iberian Peninsula - inaugurated two months before the Manueline edict of 1496 - contextualizing the late historical process of the second Hebrew diaspora in Western Europe. 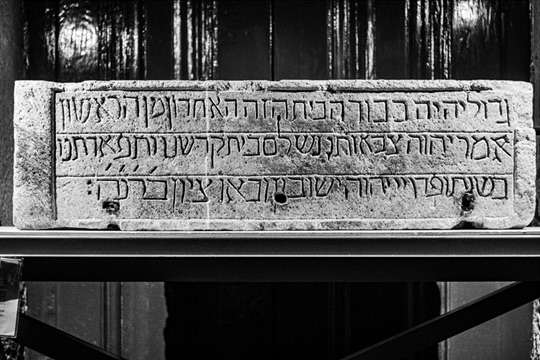 The valorization of the Jewish cultural heritage, as an integral part of the Portuguese culture, takes place from a local perspective, celebrating the cultural diversity that characterizes the country's identity trait, reinforced by the urban recovery that preserves the memory of traditional places, which were rehabilitated for everyday use, in the same way, that preserves the functionality that persists in the local collective memory, since the property is integrated in the medieval Jewish quarter of Gouveia.