Israel entered its first-ever free trade agreement with an Arab state, when Economy Minister Orna Barbivai signed the deal with her counterpart in the United Arab Emirates on Tuesday.

Ambassador to the UAE Amir Hayek succinctly announced the signing of the agreement on twitter, tweeting "Done!" in response to a previous tweet on the topic.

Prime Minister Naftali Bennett praised the FTA as "historic" and the fastest to be signed in Israel's history. He thanked Crown Prince of Abu Dhabi Mohamed Bin Zayed for accelerating the process.

"We are continuing to warm the peace between the countries," Bennett tweeted.

On Monday, Barbivai said her visit to Dubai is “of strategic importance to the economic relations between the State of Israel and the United Arab Emirates.”

"Together we will remove barriers and promote comprehensive trade and new technologies," she added. 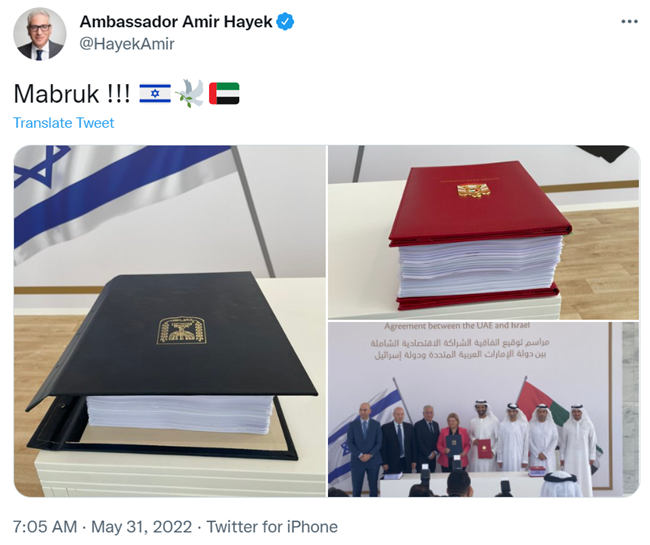 Israel and the UAE established full diplomatic relations in August 2020, in what was called the Abraham Accords. Bahrain, Sudan and Morocco followed soon after.

Israel has nineteen free agreements, including the one with the UAE. Israel also has a more limited free-trade agreement with Jordan, but the new deal with the UAE is much broader and is similar to those with the United States and with the European Union.

This agreement covers 96% of the trade between Israel and the UAE, which stood last year at $885 million.

That is more than double Israel's $330 million in trade with Egypt in 2021, even though the two countries have had a peace agreement since 1979.

According to the Economy and Industry Ministry, the level of trade in 2020 stood at $120 million and at one million dollars in 2010.

The FTA signing went forward as planned, even though the UAE criticized Israel a day earlier for allowing Jews to visit the Temple Mount, Judaism's holiest site.

"The UAE today strongly condemned the storming of Al Aqsa Mosque courtyard by extremist settlers under the protection of Israeli forces," a statement by the Emirati Foreign Ministry read, calling on Israel "to take responsibility for reducing escalation and ending all attacks and practices that lead to the continuation of tensions."

There was no documentation of violence by Jews or Israelis on the Temple Mount this week, though some did pray at the site in contravention of the rules for Jewish visitors. Some Muslims threw rocks at visitors and police from the Al Aqsa Mosque.

The statement came a day after the annual Jerusalem Day flag march through the Old City, which was mostly peaceful, though some Jews and Muslims chanted calls for violence and some minor clashes, leading to about 50 arrests.